The snowy streets of Kakunodate 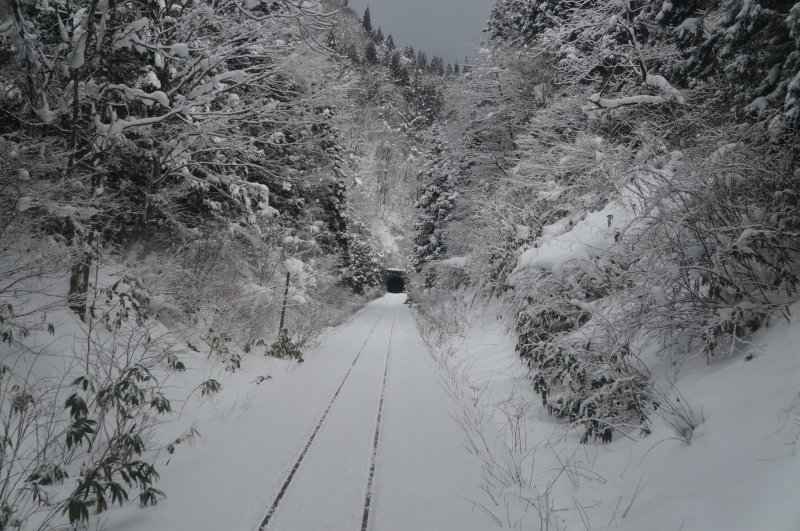 Approaching a tunnel on the Akita Nairiku Line There is no better way to see Japan up close than through the window of a slow moving train on a rural line. The shinkansen “bullet trains” might attract all the attention, but when you whizz by so fast it's hard to see all the details. So, when we went looking for our first real taste of a snowscape, what better way to do it than take a train through rural Akita?

The Akita Nairiku Line runs from Kakunodate to Takanosu in Akita Prefecture. It is a private railway so is not covered by the Japan Rail Pass and the fastest train takes just under two hours to traverse the entire line.

We began our journey in Kakunodate, a stop on the Akita Shinkansen Line. A former castle town, Kakunodate is famous for its hundreds of weeping cherry trees and well preserved samurai and merchant districts. A number of the historic buildings are open as museums, providing a glimpse of life in the samurai era. The area is also known for its cherry bark carvings and I purchased a pretty little wooden vase with cherry blossom carvings from the local craft store by the station.

Trains on the Akita Nairiku Line consist of only one or two cars and if you are prepared to stand, you can ride at the front window as if you were the driver. Trains are equipped with “voice pens” which read a supplied map and tell you how to reach the destination. The Moriyoshi Express train also had free onboard WiFi, though the standard local trains lacked the facility. Announcements were made in Japanese, English and Mandarin Chinese, making life easy for the tourist.

There are 20 tunnels and 322 bridges along the line, many almost hidden by the thick snow. The real joy is passing through the rural snowscapes, through green and white tunnels of pine trees with mountain ranges in the background. Most of the 29 stops along the way are nothing more than collections of a few houses.

Our train terminates at the railway headquarters stop of Aniai. It is a quiet town but friendly old ladies holler out greetings as we trudge through the snow. Next to the station is a small museum of the railway with photos of its history plastered across the walls with a stuffed bear standing watch over an irori at the rear.

A restaurant inside Aniai station serves a hearty horsemeat stew and other western style dishes for lunch. It seemed to be popular with the locals as well. There is also a small snack stand and railway souvenir shop.

From Aniai station we rode the Moriyoshi Express, decorated with a very cute Akita dog motif throughout, the rest of the way to the terminus at Takanosu. Between the two stops is Ani-Maeda station which features an onsen inside the station building itself. Sadly, that soak will have to wait for another trip.

From Takanosu you can catch the Ou Line back towards Akita or onwards towards Aomori and the Tohoku Shinkansen. We headed onwards to Hirosaki, famous for its apple products and Neputa museum having thoroughly enjoyed our time riding the small trains of the Akita Nairiku Line.