The jamisen player gets ready to start his performance 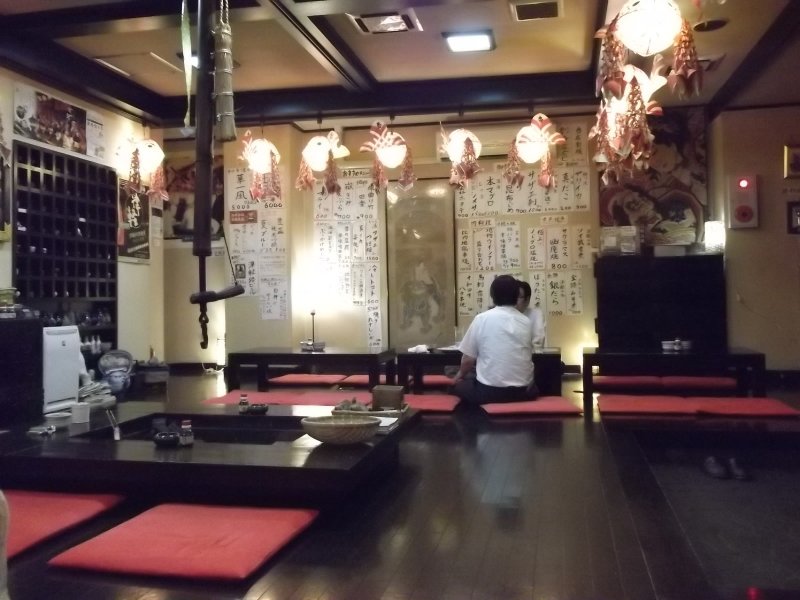 When I arrived in Hirosaki, one of the things I found at the tourist office was a little leaflet called 'Eight local culinary specialties', with information about a range of dishes and their histories. For example, much of the local food is very salty, as salt raises blood pressure in a way that helps people withstand the region's harsh winters. Anyway, a good place I found to try some of these dishes is Anzu, a venerable izakaya (restaurant/bar) in the heart of the city, close to many of the sights. Not only does it serve tasty regional food and drinks, but it also hosts performances of traditional local music.

It's a proper traditional old place, welcoming and rich in atmosphere; I took my shoes off at the entrance and stepped up onto the polished wooden floor, in a single room with low tables and floor-cushions around the sides and a low square counter in the center, built around what I guess in days gone by used to be the cooking fireplace. There are fun, colorful lanterns hanging from the ceiling, and the walls are covered with a jumble of prints, posters and handwritten menu signs, as well as a display case full of sake cups, some ornate, some colorful, some cute.

The mix of decor and the chatter of the customers at the other tables creates a lively atmosphere, and the convivial open plan means that you'll likely end up chatting or at least toasting with your neighbors. When I was there, there was a woman at the next table who could speak some English, and she helped me decipher the Japanese menu so that I could find what I wanted to try.

I started with Kaiyakimiso, a mix of seafood, tofu and vegetables cooked with egg in a large shell, that serves as both cooking-pot and serving-dish. This was creamy and warming, but the novelty of eating out of a shell didn't make it any bigger, so I ordered myself a couple of Hirosaki Igamenchi, deep-fried croquette-shaped patties with vegetables and chopped squid tentacles, which were much tastier than they sound, with a slightly chewy texture. Hirosaki being the apple capital of Japan I accompanied all this first with a crisp apple juice, then with a bottle of locally produced apple cider, light and refreshing.

While I was there I got to see one of the musical performances, with a talented young guy giving a twenty-minute recital on the Tsugaru jamisen, a three-stringed instrument similar to a banjo, but with a heavier sound. This was entertaining and added to the traditional atmosphere, and if my reading of the signs was right, it looks as if there's music twice every night. So to eat the local food, drink the local drinks and hear the local music, Anzu is a one-stop Hirosaki experience.

Local carved statues Colorful Yataka-uma horses greet you at the entrance The 'Creative tatami space' Hacchi square (during school hours, before the students take over) A traditional fishing boat, with cute lamps overhead A little diorama of one of the local festivals Every city should have a place like Hacchi.…